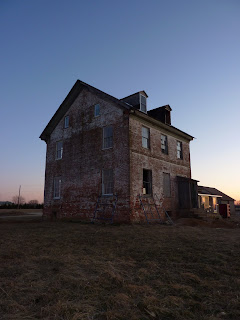 View from the southwest corner one clear winter sunrise before the blizzard.  Right about where the lavender will be planted.

What are your plans this spring?  I'm hoping for finishing up Phase I.  And for moving in.  I'm thinking it won't be too long now.  An eternal optimist, I've been saying that for the last two years.....but as long as the snow doesn't return, we are rounding third base!  Can't wait for the ground to warm up, as I have a lot of gardening plans for this spring.....and rowing plans.  Had a fun rowing meeting last night at Deb's and tried on new uniforms for the upcoming racing season.  On the water in a few weeks, yay!

This is the second rebirth of HU.  By looking at her roof line and some of the interior changes that were made, she was apparently renovated one time in her past, thought to be during the Federal period, and maybe around 1872 when she was purchased by JC Roseberry.  In the 1880 Federal Census, prior to the house being foreclosed, the Roseberry family at HU was listed as the following:

Today looks like fun outside, lots of sunshine and milder temps.