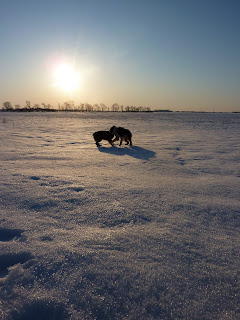 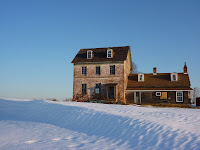 Three foot drifts behind HU, so solid now that I was able to stand on top without sinking in.  I was able to make it up the driveway, which was plowed with an artist's eye through the field.  Only a little progress over the last couple weeks due to the snow, but I think we should be moving forward next week.  Just in time to pay another round of builder's risk insurance......hopefully, for the last time. No way to plan ahead or forsee obstacles to progress, but there shouldn't be any more major delays at this time. 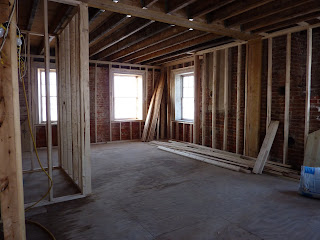 OK, feel like you're a little warmer now?  This is the living room, taking shape.  Used to be two separate rooms, living and parlor, until the previous owner who started demolition removed the load bearing middle wall.  Now we have an open space.  The closet-like room to the left is for the laundry, which will vent and drain into the basement below.  The large flat wall used to house end corner fireplaces back-to-back in each room, but the chimney fell in long ago and I won't be replacing it.  We do plan to have a gas fireplace or a wood stove here at some point in the future.  You'd be standing at the front door now, looking into the living space.  Everything is ready for wiring, and soon the sheetrock as well.