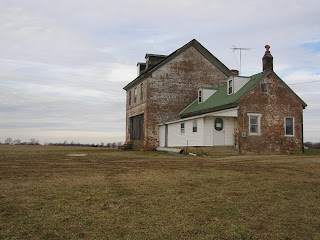 We all have family stories to tell, don't we? My family is all imported from Europe, so I'm a mix of second and third generation American.  There have been several generations of Americans living in this house.  Most recently, a few years before I bought her, families of immigrant workers from Mexico survived HU's then leaking roof, lack of plumbing, and no heat here I've been told.  I've been searching local libraries, courthouses, and memories of town inhabitants to collect tales of this house and have learned some really amazing things about folks who claimed HU as their own at some point.

Here's some history of the family said to have built at least the main structure of the house, the Groome family.  Charles Groome is the name associated with the man who built the house, but as you will soon see, first names repeated themselves thoroughly in colonial times.  Part of the mystery here was: which Charles Groome was it really?

The following information was found in:  Adolphus, George and Hanson, MA. (1876). Old Kent: The Eastern Shore of Maryland: notes illustrative of the most ancient record of Kent County maryland and of the parishes of St Pauls, Shrewsbury and IU genealogoical histories of old and distinguished families of Maryland and their connections by marriage, Ac. an Introduction. pages 180-184, John P DesForges.

(His great grandson) "Governor James Black Groome, son of General John Charles and Elizabeth Black Groome, was Governor of Maryland in 1874 and 1875."

Based on other information you will read here eventually, it's probably the first Charles Groome listed here who actually lived at HU.