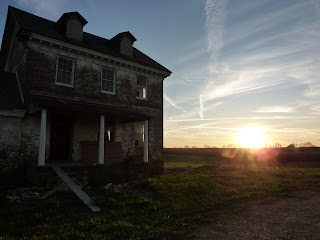 What are you going to leave behind?  Sometimes all that remains of a person's life is captured in the paper trail or the photographs.  I wish there was someone yet alive who carried the heart of this man, although I'm not sure if this is the Charles Groome that built the house, I believe it's the builder Charles Groome's son.  Some of this Charles' spirit is visible in his words below, and in the manner that he lived.  Next time, I'll show you just what material objects he collected while he was alive.  For now, read his legacy:

"In the name of God Amen I Charles Groome of Kent County in the State of Maryland being sick and weak in body but of sound an ddisposing mind and memory and understandig considering the certainty of death and the uncertainty of the time therof and being desirous to settle my worldly affairs and thereby be the better prepared to leave this world when it shall please God to call me hence, do therefore make and publish this my last will and testament in manner and form following that is to say, First I commit my soul into the hands of Almighty God and by body to the Earth to be decently buried and after my debts and funeral charges are paid, I devise and bequeath thas follows:  I give and bequesath unto my brother Daniel Groomes's four children viz Martha, Margarett, Posegrine and Lavina my negro man Joe to serve them during his natural life.  Also negro Jum called Jimboy, Jake, Sall. Emeline and Angeline ( the last two being daughters of  Tinah) to serve them until they the said last five negroes respectively arrive to the age of thirty years, when it is my will that they be free rom servitude and also my negro woman Jane for the term of five years - then to be free from servitude---

Item.  I give and bequeath unto my brother James Groome's five children viz Isaac, Charles, James, Sarah and William my negro Sam to serve them for the full term of five years commencing from the first day of January next after my decease, and after the expiration of said term of five years, he is to be free from servitude.

Item.  It is my will that my egro Step be free from servitude on the first day of January next succeeding my decease; also that my negro woman Tinah be free at the same time provided she pays to my executro hereanafter names within three months after my decease the sum of money that is due me for her hifre which is about forty or fifty dollars.

Item.  I give and bequath to my brother John Groome the times of servitude of my bound boys Bill and Perry.

Itm.  I give and beqeath to my brother John Groome my negro Jane's children Isaac and Jim and also any other child or children she may have before my decease - all of which children are to be free when they respecitvely arrive to th age of thirty years.

Item.  It is my will that if when the aforenamed Jane, Sall or Tinah, have a  child or children after my decease and before the end of their servitude, then and in that case, the said child or children are to serve the respective owner or owners of the mother untill they and each of them arrive to the age of thirty years then to be free from servitude--

Item.  Ist is to be ensimply understood that all claims whatsoever that may be brought against me by any ofr all of my deceased brother Daniel Groome's children also all accounts whatsoever between my brother James Groome and me are completely and finally settled and satisfied.  If any of them should contend otherwise then it is my will that all the above and aforementioned legacies and bequests to the said Daniel and James Groome's children by void and of none effect--

Item .  I give devise and bequeath to my brother John Groome all the rest and residence of my estate both real and personal to him, his heirs, and assigns in fee simple forever.

In testimony whereof I have hereunto set my hand and affixed my seal this twenty second day of October in the year of our Lord one thousand eigh hundred and eleveen.

Signed , sealed, published and declared by Charles Groome the above named testator, as and for this last will and testament, in the present of us who at his requestt, in his presence and in the presence of each other have subscribed our names as witnesses thereto, two interlineations and one erasure being first made.

What is most notable about this will is that he named no child heir.  No grandchild heir.  Something is missing. Was he alone at his death?

Keep those you love in your hearts and stay connected.