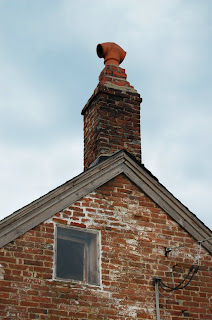 Why do we take the shape we take in this world?  Why do we create the shapes we create? Our environments pull out of us these unique qualities we have so that others on the outside can witness us.  Which leads to our imprint on them.  Sometimes it works well, and sometimes chaos ensues.
This chimney cap seems to fit well here, surely friends with the chimney below, watching over the surrounding fields.   The small window appears to be a later addition, and leads into the half story above the kitchen wing.  We have replaced it with a custom built Anderson window; the sill was termite eaten and the plexiglass needed to be recycled. 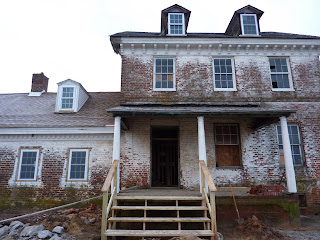 Here's the emerging front entrance of the house.  I'm not really sure now if this was the original entrance or not.  The staircase interior doesn't face this door, and the door on the South side appears more ornate from the interior.  Exterior details are almost the same on both sides.  It also seems the road used to run in front of the other side of the house (this is the North elevation).  But the again, not really sure when the house was built.  What's clear is that the door you see used to be a window and the first door appeared to be the middle window.  The dormers in the roof (full attic) on the main part of the house will have the fluted pilasters replaced when the finish carpentry is completed.  Those dormer windows are custom Anderson, as well as all the windows on the kitchen wing.  The other five windows on the main portion are refurbished "original" (house was renovated in the late 1800s and the real original frames replaced at that time) frames and some original glass remains.  The new stairs replaced crumbing cement ones that were added within the last century.  The cement porch will remain, the cement is like granite.  They just don't make cement that way anymore!

Front door before I removed it to repair.  Note the window arch bricked in above the door.  These doors are much shorter than current standard doors and featurethe original period faux wood grain paint on the reverse side.

This is the interior of the South door, which is currently the back of the house.  Note the exensive wood trim, which is original to the 1700's.

This is a photo taken from the South elevation exterior, you can see the staircase inside and the orientation of the staircase to the Southern exposure.

This is the current rear or Southern elevation.  Same belt course and water table.  The dentil molding from the current front of the struture is missing, but was likely added in the 1800's.  Also note the roof doesn't really belong to the Colonial period, and is more of a Federal kinda thing.


Jeff was hard at work yesterday with a backhoe, trying to clear the massive amounts of snow from the 1000 foot driveway.  Should be back to business soon!

Have a great day!