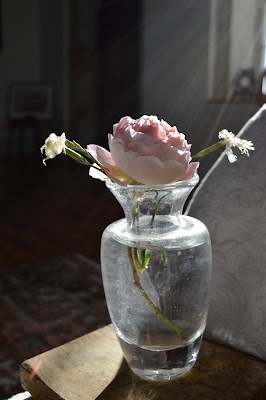 Sometimes, just sometimes, in the midst of the coldest winter, the grayest days, the shortest hours, sometimes unexpected joy deposits itself at our doorstep.

One of my rose bushes decided to produce a single flower, and the clove pinks agreed with the plan.  Next, the sunshine conspired to stream through the window just right. A bit of cheer, greatly welcomed. 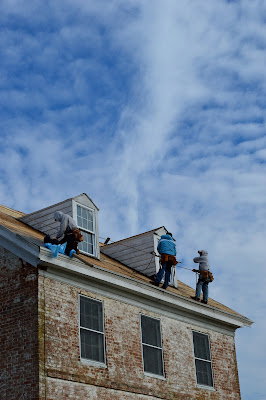 And this, a completely replaced roof due to Sandy, even though one part of the roof was less than two years old, and the other part, less than four.  Sandy tore off the west and east corners of the main roof, and played games with the shingles all over both roofs.  A team of several roofers descended on the house last week and boom! All done in two days.

Green Energy Design is finishing up the turbine and should have it up in the next two weeks.  Then, we will be entirely self-sufficient and producing enough electricity for the grid to purchase back.  We talked today about a plan to put in a battery backup system in case of power loss to the grid.

Happy holidays to all