Some background and progress....... 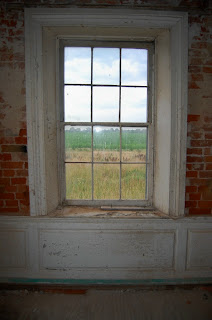 Hours of digging out the dirt floor bucket by bucket.
Both the kitchen and dining room floors had joists sitting on dirt, and of course the termites are not going to pass up an opportunity for a feast. Most of the wood structure in both sides of the house had to be replaced due to termite damage that spread up from the kitchen and dining room. Below the wood floor in the dining room was a layer of dirt (several inches) on top of a brick floor (see photo below). Below that was another several inches of dirt, and then brick rubble. It's really not clear, even after an archeologist came out to take a look, which room is the original room. My money is on the kitchen, which is where my daughter is sitting, scraping away at the dirt, looking for artifacts. 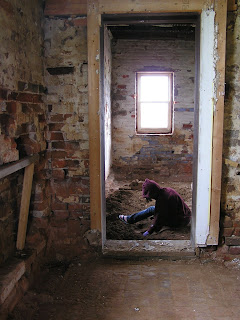 After we removed the dirt, we noted what appeared to be a stone foundation extending from the eastern gable wall, and the width was consistent with a fireplace foundation. We also noted paint traces in a pattern reflecting an old chimney ghost on the eastern gable kitchen interior wall. There is still a fireplace chimney interior to the end gable wall structure, but not operational at this time. It has a nice unusual cap on it.

We carefully removed the dirt down to about three feet, poured a partial floor, and then created an interior cement block foundation to set new joists on. This way we have space for the plumbing, electricity, and HVAC systems, as well as a barrier to the termites....and no damage to the existing foundation. The interior brick you see crumbling has all been repaired by a mason with approximate mortar mixture to the period of construction. Of course, this wasn't an expense we planned for in the original budget.....ouch!

We saved all the dirt removed from the structre. We spent a large part of 2008 and some of 2009 screening the soil for artifacts. Haven't been through all of the soil yet, but have found marbles, children's toys, pottery shards, a coin, bones, shells, and other fragments of glass and cloth. I'm estimating we have over 1,000 pieces collected, to include the head of a broadaxe (found under the dining room dirt floor) and the intact clay bowl from a pipe.

These two rooms, as well as the rest of the house, are now are fully framed, new windows in place, new subfloor, getting ready for all the systems to be installed over the next few weeks. We replaced the roof on this side of the house and the windows upstairs as well. We have a new well and septic system; HU has never had any plumbing. We are installing a gas fired HVAC system with the option to convert to geothermal in the future. Our plans call to stand up a windmill at some point in the near future. The site is incredible windy, and the energy consultant that came out to estimate wind speed deemed the site very healthy.

The remainder of the structure had a roof replaced before I purchased HU, but will have to be redone as I can afford it as the cedar shingles were placed directly on plywood.....that won't last long! Insulation as been added in the attic and half story roof space.

We've been lucky to still have the original staircase, fireplace mantels, wainscoting, and doors. The previous owner, who was a contractor made minimal structural repairs, removed the interior walls between the living room and parlor rooms, and the upstairs bedrooms, and created a larger living space that will be retained downstairs. Upstairs will be converted to a master suite. Much of the original floor plan is retained. It's a roomy house with roomy dimensions and lots of light and air. Very unusual construction for a rural home in this area, but makes sense when you learn more about the man who supposedly built the main house, Charles Groome.