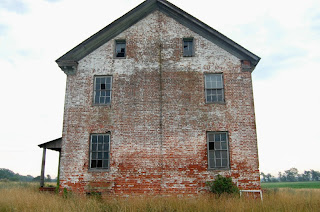 OK, my big questions are:

Why so many men in such a large partnership on one parcel of land?
Why the name the hopefull Unitie -what were they trying to unite?
Where did the navigable waterway go?
Where was the original road?
Why such a substantial structure way out there?
Why next to one of the earliest Quaker settlements? 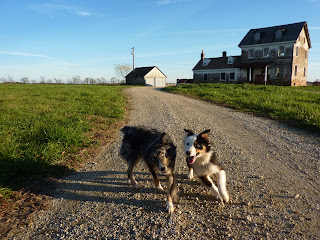 Can you imagine a snowfall in the late 1600's like the ones we just had? I can't imagine the discomfort, the loss of limb and life, and the fear of survival the settlers experienced. We have so much now to ease our lives now, and every day something new to make discomfort almost imperceptible in a quick moment. One of my great joys about this project is an appreciation for an earlier life as I imagine it must have been, and a true gratitude to have some creature comforts now.....so our snow is melting slightly now, and I'm still a bit housebound. I've let my dogs out to run a bit this morning, and Hope (blue merle Amish Aussie rescue) took her time on her return. I could tell she was ignoring my whistles, just for a few more moments of frozen freedom. Teke (tricolor Treestarr Aussie), on the other hand, is like velcro, the fluffy type, and immediately returns when I need him too.


Alrighty, for those of you that enjoy the details of the history of our great nation, I had to include the original paper trail. For the rest of you, I apologize in advance, this next part may put you to sleep.

The words themselves in a blob on the page mean little to many, but each man in this colonial partnership contributed to the founding of our country, some in big ways, some in small. It took several months of searching for me to find these documents, which are kept in the state archive due to fragility. I think it's sad that they're hidden from view on a musty shelf somewhere, so I place them here for all to enjoy. The documents reflect a style of thinking and writing, as well as the religious and political structures of that time period. Before I head out to run some errands I thought I'd record here the exact words from the land grant, as I'm translating them from an old handwriting and use of English off the copy sent to me directly from the archives (spelling and punctuation original):

And the original Land Survey:


"To the Right Honble The Lord Propry. These in humble maner thereweth that by vertue of ____ of twelve hundred fifty acres of land granted to Col Vincent Lowe being due to him by Afsd from Christopher Browning and from the said Lowe due William Hemsley Jun. and lastly by afsd of one hundred and fifty ("and fifty" was lined through) acres of this forementioned Wart.to Charles James, James Frisby, John Howell, George Wardner, Joseph Hopking,s Wm Peerce, Richard Pullin Ebenezer Blackistone Benj. Gunry, Edward Blay and Robert Sanders and bearing date the Sevth day of March last past and by vertue of past of a wart. for four hundred acres of land granted unto John James being due by reneal of a wart. of the same quantity and bearing date with the aforementioned wart. which part being fifty acres William Hemsley Jun Dly Swrn under the Honble Col Vincent Lowe Ws Gen of the province of Maryland have laid out for the afd Charles James, James Frisby, John Howell, George Wardner, Joseph Hopkins, William Peerce, Richard Pullewn, Ebenezr Blackestone Benj Gunry Edward Blay, Robert Sanders and John James all of Cecil County a parcell or Tract of Land lying in Cecile County and Called by the name of the hopefull Unity. Beginning at a Marked Red Oak Standing on the West Side of the Maine branch of Steele Poole Creek and runing from the Said Tree West and by South one hundred and fifty perches to a markt white Oak Standing on the North Side of the main Road and runing from thence with a line drawn from the aft white oak with a line drawn South and by East One hundred and sixty perches and from thence with a line drawn East and by North one hundred and fifty percehes and from thence with a line drawn to the first bounded Tree (?Bulaining?) and now laid out for one hundred and fifty acres of land more or lefs to be holdn of the mannor of Baltemore May the 12th 1682 ___ Wm Hemsley Jun. Dly Swn. On the back side fo the foregoing Certificate was Endorfed this following Afs Vezt Maryland is Know afment by these presents that I James Frisby of Cecille County Do give Grant Bargain Sele (InfeoFF?) and Confirr unto Wm Hemsley Jun ale my rights title and interest of the within mentioned Certificate to have and to hold to him the said William Hemsley Junior his exec, admits or Afsignes from me my heirs Exec Admi. or Afsigne, , or any other perfon or perfons whatsoever. In withnefs whereof here unto I set my hand and Seal this 16th day of October 1682."

Next time, we'll start to explore the lives of the families who lived in the house....
Kate