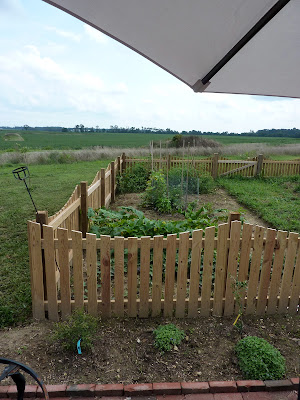 Learned a lot of lessons in the last week in my garden.  Here's the view from the table, under the shade umbrella.  You can see the olive tree seedling, if you look closely, which will be an espalier against the fence as it grows.  I planted the vegetable garden very late this season, so now I have only okra, sweet potatoes, peppers, tomatoes, artichoke, pumpkins, horseradish, and various herbs growing in chaos.  I promise to do better next spring.  It was a small problem getting the fence built that caused the delay. 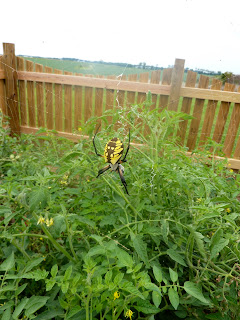 The tomatos threw a riot and invited their friend, which I learned is called a Writing Spider, and although it looks ferocious, it's not harmful to humans.  This is the female, the male is smaller and has a web spun in the next tomato plant.   Let's just say I left the tomatoes alone today. 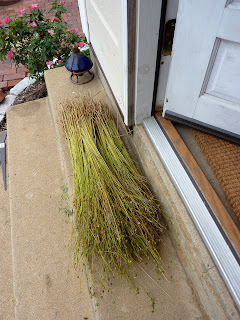 Okay, so the second and third lessons I learned: how difficult it is to harvest flax from  field that is filled with weeds, and why the golden color is called flax.   The harvest took me a couple of hours, and was actually like a treasure hunt.  The stems are a golden yellow color at this time of summer. 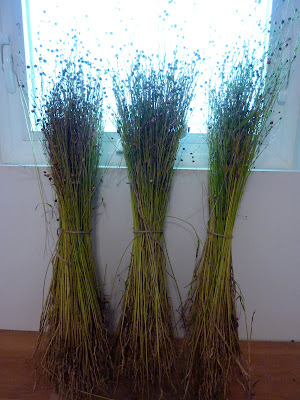 So our harvest yielded three sheaves, probably not a lot to make much from, but still pretty cool.  Here they are drying.  First step in the process of turning it into linen.  Next I'll strip the seed pods and save the flax seed.  After that, the step is called retting, and involves placing the stems back outside on wet grass to rot it just a little.  More to follow as we continue the process. 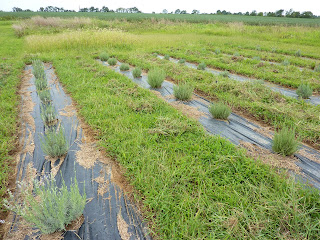 The lavender has grown a bit since planting a few months ago, and it was time today to trim it back so it forms a round shape nicely in the spring instead of flopping open in a spindly way. 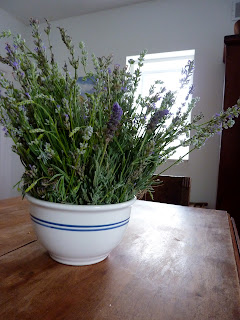 The smell of lavender is permeating the entire house now.  These are some of the clippings of what was trimmed this morning.  I also learned today that lavender is very easy to trim..... if you do it when the plant is very young.

Cooler weather this week, very grateful for it.